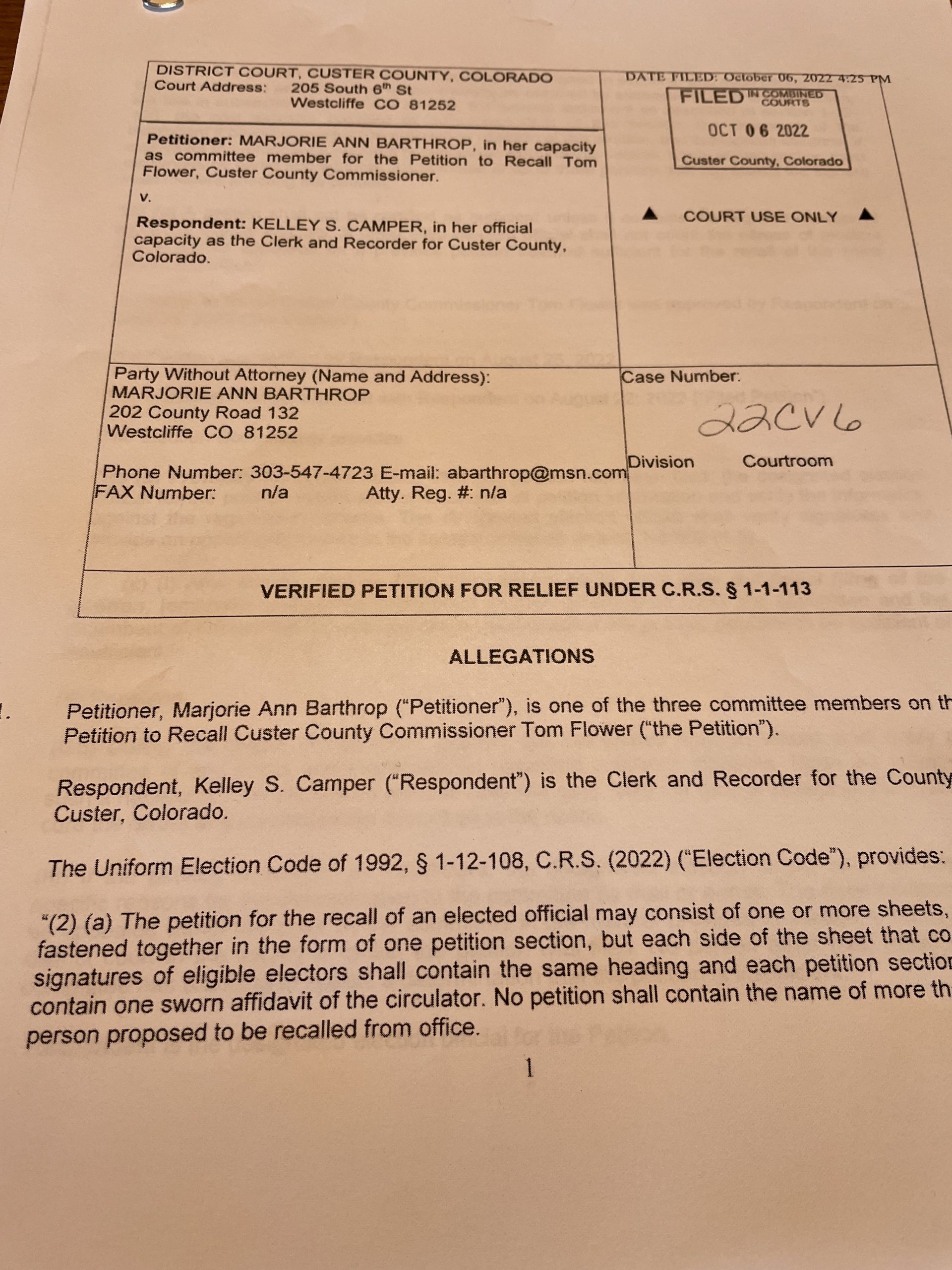 The Custer Board of County Commissioners (BOCC) held their regular mid-monthly meeting in Wetmore on October 19. Actions taken included consideration and approval of accepting additional ARPA funds from the federal Local Assistance and Tribal Consistency Fund (LATCF), and directing the Planning Commission (PC) to revisit some Zoning Resolution policies on Short-Term Rentals (STRs) and home-based businesses; the latter to allow for more home-based daycare centers in the county. The BOCC also heard a report from County Attorney Clint Smith that included the news that County Clerk and Recorder Kelley Camper is facing a lawsuit.

Under Attorney Items, Smith reported that the committee formed to force a recall vote on Tom Flower had now turned their sights on Camper. Ann Barthrop, head of that committee, has filed a legal action in District Court against Camper, because Camper disqualified enough signatures on the recall petition to dismiss it. Smith recommended to the BOCC that they authorize Camper to hire a private specialist in election law: “I have reviewed the lawsuit and I have found a number of problems with it,” he said: “I would like to share opinions with this [counselor].”

“By authorize, you mean pay for it?” asked Canda. “Yes,” Smith replied: “I don’t want to represent [Camper] myself because I worked with Ann Barthrop on the Justice Center project. I have no idea how much the charges would be, could be $10,000 – $15,000. I would feel more comfortable not being involved – I couldn’t report to you if I am her lawyer because of attorney-client privilege. I think that the lawsuit can be dealt with expeditiously.”

“I don’t want to do this unless we have some idea of how much the retainer would cost – can you represent her until we get answers?” asked Canda. “Let me talk to the attorney up there – I think Kelley can handle this, I’ve reviewed her communications with [the recall committee], she’s very confident on her reasoning about which signatures were allowed and which weren’t.” Smith replied. “It’s kind of hard to understand exactly what their claims are – I will get some more information and let you know.”

“I think this is a frivolous lawsuit,” declared Flower. “As a county commissioner, my job is to save the county money, would you serve as her attorney if we asked you to? Unless you truly don’t feel qualified. I don’t care whether you feel comfortable or not, that’s what we pay you for.”

“I’m qualified to do it,” Smith said.

“To [Canda’s] point, I can’t see spending 20-30 thousand dollars when we have a county attorney,” Flower said. “If there’s a real conflict of interest that’s one thing – I don’t want us to be seen as throwing [Camper] to the wolves…if Kelley for whatever reason wants to hire outside counsel, she can.”

“I want to save the county money,” said Camper, who was present at the meeting.

After public comment and a discussion of whether or not Administrative Assistant Jennifer Kriegh should be authorized to send out Board packet documents to citizens who request them, the BOCC turned to new business. Human Resources Manager Braden Wilson introduced a consideration of the 2023 budget review and approval process. December 6 will be the date for the final public hearing. The BOCC voted to set the time and date for 8:30 a.m. on November 7 for a budget workshop.

Flower introduced a motion for the county to accept $836,000 in LATCF funds, split into payments over two years (2022-2023). These funds are intended as a supplement to previously received ARPA (American Rescue Protection Act) funds. Flower explained that the money was a grant intended to be used as general operating funds for the county, and the only restriction was that they “can’t be used for political leverage.” A motion to accept the funding passed unanimously.

In the wake of another instance last month where they had to vote on the PC’s decision to deny an STR permit, the BOCC introduced a consideration of asking the PC to rewrite policies on initial and renewal processes for STRs. “I think we need to schedule a workshop with the PC,” said Planning and Zoning (P & Z) Director Dorothy Carstens. “I think we need to start doing tours again – I don’t know if that’s something we did in the past, it definitely didn’t happen in the last year or so. The PC members agree that doing site tours would be very beneficial to all of us.”

“So, you’re asking for a workshop to help determine how to improve these STR processes,” said Canda. “Have you talked to [PC Chairman] Keith Hood about this?” “Not yet,” Carstens replied.

“I can tell that there have been issues with the process,” said BOCC Chairman Kevin Day: “I would say at this point that we need to address not only STRs in this workshop, but anything else that we need to look at with changes to the Zoning Resolution – so we’re not continually going back. I asked [Carstens] to put together a list of different things so we’re not meeting to change things again three months later.”

Canda made a motion to recommend to the PC a workshop to make changes to the STR policies, and also to address parameters for home-based daycare. Flower seconded the motion, saying, “I think the home daycare stuff is going to affect a lot of other things as well – I think we should make it a BOCC workshop and invite the PC to attend. Let Dorothy set the date and get back to us.”

During discussion, PC member Mary Mowery, who was present, addressed some of the issues that had been raised about the PC’s decisions with regard to STR permits, particularly as it regards to neighbor complaints, which sunk the STR permit for 1680 Keepsake Loop last month.

“How much weight should we be giving to neighbors’ [opinions]?” Flower asked her. “We have to change the [neighbor commenting] process to privilege adjacent neighbors,” Mowery replied. “We can’t tell people they can’t speak at public meetings, anyone can,” Flower responded.

“Speaking about it afterwards, we had a mob [at the PC meeting],” Mowery said. “We maybe shouldn’t have given in to it.” “We can’t accuse someone of being guilty before being innocent,” said Canda, who had been the sole BOCC vote to overturn the PC’s recommendation: “We need to be dealing with facts – don’t throw any ideas out before we discuss them.”

“I think too that HOAs and POAs should be coming up with regulations on their own if they’re so concerned about [STRs],” Carstens added.

Day called for a vote on the motion to set a BOCC workshop to discuss Zoning Resolution changes. “Aye, if we do it before the end of the year,” said Flower. The motion carried unanimously.

In other business, the BOCC voted to approve letters of support for the San Carlos Ranger Station and the Custer County Tourism Board in seeking grants, and heard a complaint from Chris Bryson, alleging that the Office of Emergency Management (OEM) was out of compliance with FEMA because its hazard mitigation plans, such as the community wildfire mitigation plan, had expired. He accused OEM Director Adrian Washington of being “dishonest” about the OEM’s subsequent eligibility for grants.

“You’re saying you don’t believe [Washington] is working on a hazard mitigation plan?” Flower asked. “No,” said Bryson, “but the plan is expired.”

“Well, I did talk to Adrian, and he said he updated it last year,” said Canda. Further discussion revealed that Bryson’s concerns were at least partly driven by resentment at being passed over in Washington’s favor for the position of OEM Director, a fact that Canda addressed directly in his response, adding: “You’re charging him with all this and you haven’t talked to him yet. You know where he works – if you really do care about the county and not Chris Bryson only, you can walk over to his office and talk to him.”

The BOCC then adjourned the meeting to go into Executive Session.