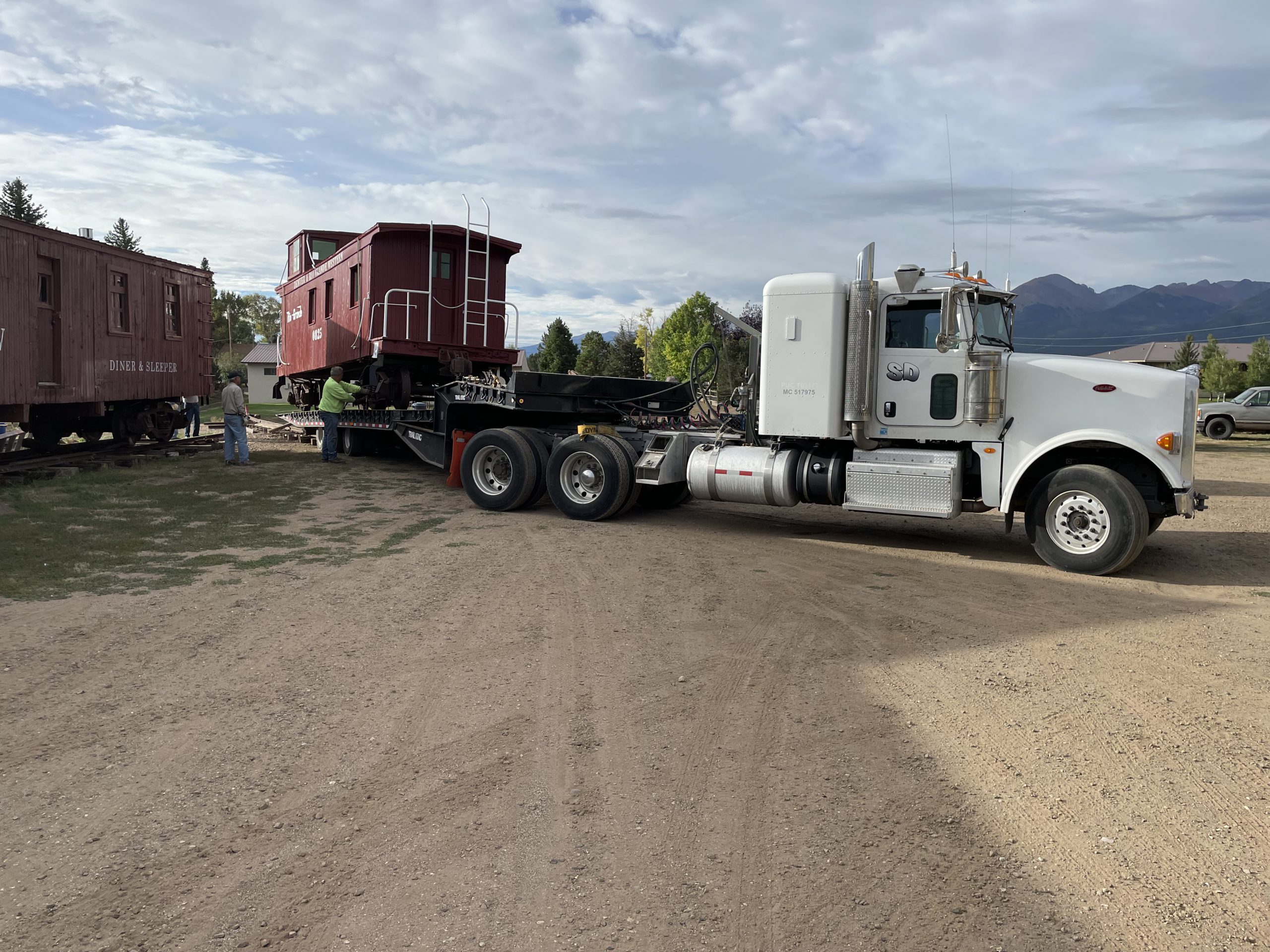 How fitting it was that All Aboard Westcliffe’s Denver & Rio Grande caboose #0825 was moved from its interpretive display off Rosita Avenue to new prominence by the restored depot on Main Street at this particular time. It will have been 85 years next month, when D&RG filed to abandon the Westcliffe Branch and its storied service to the Valley; the last train rolled out the following year, 1938.

D&RG originally reached Westcliffe and the Valley in the 1880s by way of the narrow gauge Grape Creek Branch, from Cañon City. D&RG was expanding its track after it had won “the railroad war” with Atchison Topeka and Santa Fe along the Arkansas River. Westcliffe and Silver Cliff, of course, were already known for promising silver mining. The route engineered and built however, followed Grape Creek, and when it flooded in 1884, the line was wiped out, and rebuilt. When flooded out again in 1889, that route was abandoned.

Ten years later, the D&RG again reached Westcliffe, but now by a new standard gauge line turning south from the Arkansas at Texas Creek. That service, as is often noted in the Tribune’s “Peaks of the Past,” was a significant part of the Valley’s ranching and agricultural economy.
The refurbished D&RG caboose #0825 was built in 1889 by Peninsular Car Co., and spent its working life on the D&RG, retiring in 1954. It came to AAW from the family of retired D&RG railman Charles Templeton, who in his retirement had lived in the caboose outside of Florence. His granddaughter, Manitou Springs-based photographer Sally Thurston, was in attendance for the September 21 move of her grandfather’s cherished caboose.

A crew of about ten AAW volunteers has diligently been at work on #0825 since mid-June, giving literally countless hours to the careful refurbishing, painting, and securing of the caboose for its move. An indication of how thoroughly engaged the local community has been in its restoration is the fact that the tongue and groove wood was supplied by Len Lankford’s Greenleaf Forestry.

The move itself began under gray and threatening skies that chill Wednesday morning. Disher Trucking, out of Commerce City in the Denver metro area, had arrived a little earlier for the job, and had the caboose strapped down and ready to roll around the block by about 9 a.m. For The “You name it, we pull it!” Disher crew, this was a walk in the park; they were in-between their usual duties as a company that cleans up train wrecks, headed out later for Nebraska. The driver, Jesse James—yes, Jesse James—also had his delighted, beautiful toddler daughter with him in the cab; she was just as enthralled as were the 30 or so local folks who had turned out to observe the move.

And the manner in which James eventually backed in the immense Disher flatbed and its caboose load, lining it up perfectly with the newly restored track by the Main Street Depot, was indeed, for us lesser folk who merely drive pickups and tractors, a sight to behold. Slowly, creak by creak, the old caboose inched down the incline to its new and final home, in place by around 10 a.m. The threatened rain never fell until the journey ended.
Soon to be open once again for public visits, #0825 simply sits grandly where the trains once churned into and out of Westcliffe. If one listens closely in the quiet of the Valley, one might just hear the rails sing, the engines chuff, and the cars rumble. But even without that imaginative listening, one can view the “finally” retired D&RG caboose in all its former glory, day or night.

Thanks to the good and hard-volunteering people of AAW, this part of Valley history and rail legacy is alive and well. They can help us all remember, recall, and cherish what once was, in the celebration of the here and now provided by the museums, interpretive center, and now rolling stock attending the Depot.