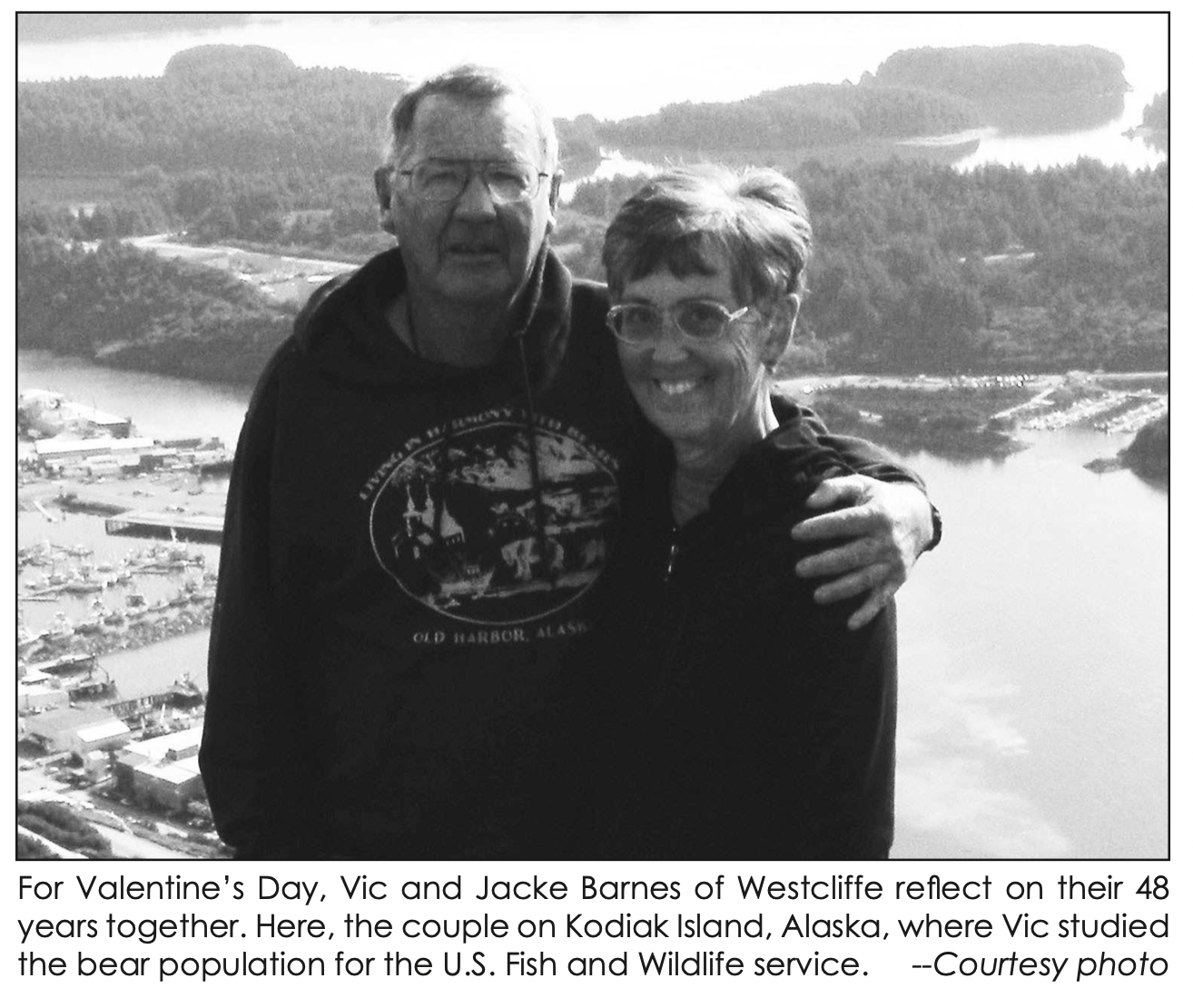 From the Archives: Vic and Jacke Barnes discuss life in the wilds of Alaska

(This story was originally published on February 9, 2017. Vic Barnes’ memorial service is Saturday July 16 at 11 a.m. at Hermit Park in Westcliffe on the far southeast side of town. Events at the Custer County Fairgrounds have been delayed 30 mins to 12:30 to accommodate the services. Vic was always a huge supporter of local youth activities and would wish for everyone to attend the local livestock auction and award ceremony.)

While love is a universal emotion and celebrated every year during Saint Valentine’s day, the cultural traditions of courtship, marriage, and family life change with the generations. Local residents Vic and Jacke Barnes recounted their lives together, the joys and frustrations of marriage, and a long unforgettable journey across the American West and Alaska to finally settle where Vic started, in Westcliffe.

“Jacke was raised in Olympia, Washington and when I got my first job with the Fish and Wildlife Service they transferred me out to work at a station there. Jacke was working for the forest service in the same building in 1968,” Vic recalled. So, the new young man from Colorado asked Jacke out on a date.

“It was interesting, Vic was and still is very outdoorsy, and I am not. We have a few similarities, but we are opposites in many ways,” explained Jacke. “These days it seems that online dating tries to find similarities between people, so that they can live life in lockstep, but for us, being different worked.”

The first date was in Tumwater below the former site of the Olympia Brewery and they dined at Falls Terrence Restaurant that overlooked the river. “We had a nice dinner and then walked on some of the trails in the park that surrounded the area.” Did Vic choke on the first date? “No,” Jacke smiled at the question, looking lovingly at Vic, “he was great.”

Yet other dates took some more interesting and prickly turns. Vic was studying the behaviors and damage caused by porcupines and needed to release one that he had captured to place a radio collar on; naturally he invited Jacke on the trek. “Vic seemed to think this would be a good outdoor date. After driving the truck as far it would go up Mount Saint Helens Vic took-out the snowmobile, had me sit behind him, while I was holding the porcupine.” Jacke continued, “This was the first time I had ever been on a snowmobile, there was a huge drop-off on the one side, its freezing cold and let me tell you, porcupines are considered fairly docile, but this critter was even less pleased than I was about the whole experience and thrashed around all the way up the frozen volcano.”

“That’s when I learned she liked big drop-offs,” joked Vic. I had a great time.”

However, despite the volcano adventure, the couple stayed with each other, and against Jacke’s original stance on not getting married, they were wed in Seattle six months after the first date in January 1969. “Vic changed my mind.”

The couple moved to Bend, Oregon for 12 years with Vic remaining with Fish and Wildlife. They raised three kids in the small city. “I loved to garden and we grew a lot of our own food. Vic hunted, and we bought a small house,” recalled Jacke. “I was often in the field, working as a biologist and studying animal damage,” Vic added.

In any relationship, tensions rise, yet the two always respected each-other, even during an argument. “You know, we loved each-other, and while there would be some tension, we never really lost it. It was respect.” Jacke continued, “Another thing is that our family was always on the same page. While we loved the kids I would always tell them that, ‘your father and I will still be together when you move away, so our relationship is important.’ I was not being uncaring, but you could not call me a helicopter or soccer mom. The kids were a part of the family, the family was not centered only on the kids. That seems to have changed in society since then.”

It was Vic’s job that launched the family into its great adventure in 1982. “I had an offer to study bears on Kodiak Island in Alaska and while I was not sure how it would all work out, the whole family moved with me.” Yet while such a move would chill the heart of most suburban wives, Jacke took the whole change in stride. “I knew it would work out, I did not know how, but we had faith.” The family would remain on the remote island for 16 years, and all three children graduated from Kodiak High School.

“I had made a pact with myself that I would never let a dollar stop me from doing what I loved. And I loved my job.” Vic explained why he had such a passion for biology. “I could care less about money, but Jacke was good about handling the finances and keeping everything in the family together.” Because of the extreme cost of living, the family lived in government housing the entire 16 years on the island.

It was only after Vic decided to slow down that the couple, now with an empty nest, decided to move to Westcliffe, where Vic could rejoin much of his childhood family. The family still owns parts of the old Walker Ranch at the base of the Sangre de Cristos. “I had always known I would move back; Westcliffe is where I developed my love for the outdoors when I was a boy,” concluded Vic.

When asked what advice they would give themselves if they could on the day they were married, Vic and Jacke looked, smiled at each other, and answered that neither could think of something major they would have changed. “Sure, you always think of little things, but we were never all that stressed. We just were committed to each other and living life, doing what we loved,” Jacke said.

Vic and Jacke are active in Westcliffe but still take yearly trips back to Kodiak Island to reconnect with friends. Their three children visit Westcliffe and are known by many in the Valley. The oldest son Joe lives in Buckley, Washington, Amy lives in Gresham, Oregon, and the youngest son Jack resides in Pittsburg, Pennsylvania.