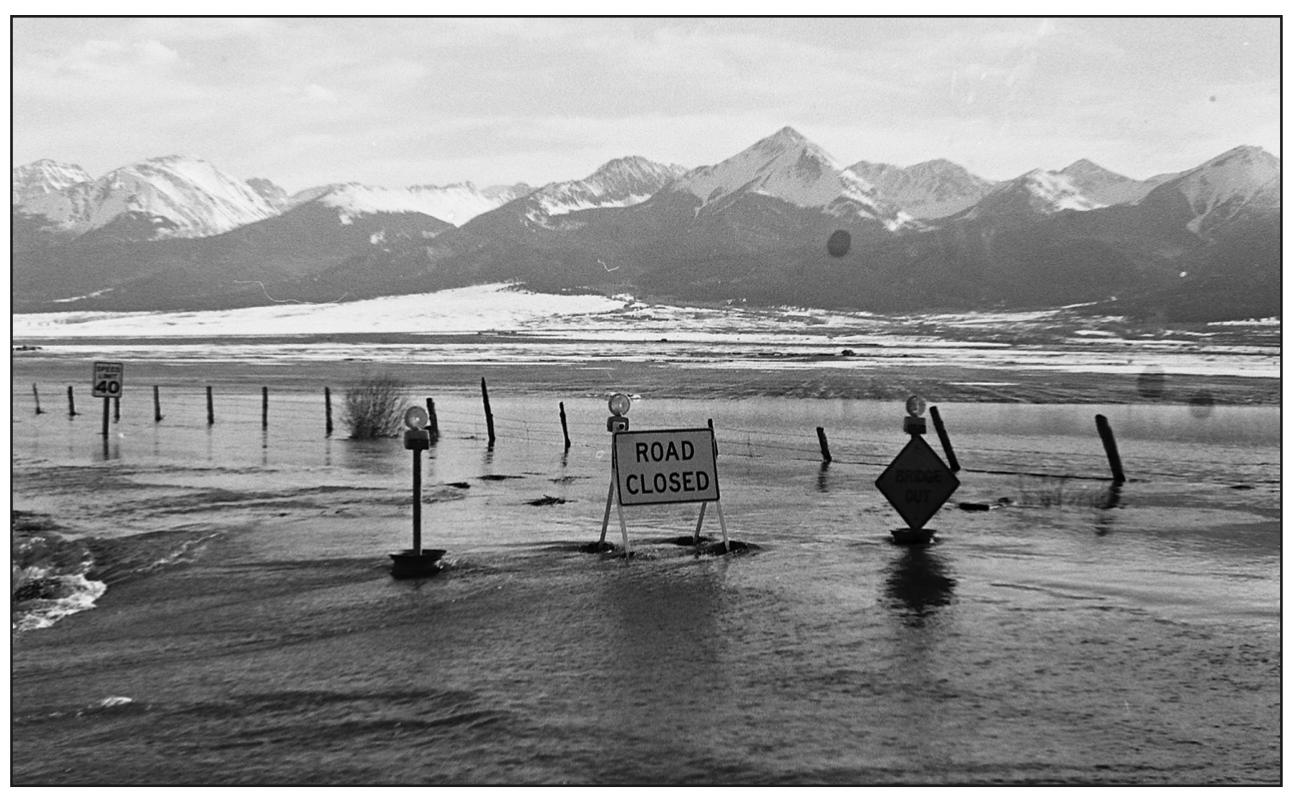 April is historically the worst flooding month for the Valley

There is no denying that the weather of recent has smacked of deep winter, with just the faint hint of spring in the few warm days this past weekend. But as March starts to draw to an end, the actual realization that the peak flooding season is just a few weeks away is the last thing on most people’s minds. For those who have been here for over half a century, they know that the most disruptive floods come in April.

This is a surprise to most in the Valley, including local emergency management, as it is often assumed that peak flooding season comes from the late summer monsoon season in July and August. While the monsoon season is the source of the highest one-day rainfall in the Valley, and the “gully washers” of the cloudbursts during summer, the most disruptive floods historically come in April.

This revelation for the Tribune staff came by accident when Mark Perry, a Professional Engineer with the Colo- rado Department of Dam Safety, reached out to the Tribune a year ago regarding the worst floods that hit the dam at Lake DeWeese. Perry had some requests for stories about the worst flooding events and descriptions the Tribune had published on the floods at DeWeese. The worst flood that he was most interested in was on August 2, 1966, when several days of extreme cloudbursts hammered Antelope Valley and the DeWeese area with the Tribune reporting several feet of water spilling over the top of the dam.

While Perry was glad to get information on the worst DeWeese water event, where the intake at DeWeese on Grape Creek registered a staggering record of 7,460 Cubic Feet per Second (CFS), the most interesting aspect of the data that Perry provided to the Tribune is that 7 of the worst 10 flooding events on Grape Creek since 1925 took place on June 19 or earlier. The reason was deep snowpack mixing with suddenly warm temperatures, plus a frozen ground trapping the water and preventing it from absorbing into the soil.

The damaging aspect of spring floods is that they do not dissipate as fast as the summer flashfloods. For example, the second highest CFS recording of 1,960 at the intake at DeWeeese took place on April 23, 1942. Unfortunately, Tribune records do not exist for this time frame as the effects of World War II and paper rationing plus the withdrawal of the railroad took a toll on weekly publishing. However, according to some natives at the time such as Don Camper, the roads to Westcliffe were blocked for weeks as the area around Westcliffe was impassible.

The effects of the 1942 flood are hard to put into per- spective. A deep snowpack was suddenly exposed to warm temperatures and a rainstorm. Many of the deep ravines in the Wet Mountains were caused by this single event in 1942, as the heavy water flow mixed with overgrazing and the tilling agriculture of wheat and potatoes in the Wet Mountains. The sudden water event gouged ravines up to 20 feet deep in most locations in the Wet Mountains. A decade later, the Army Corps of Engineers would try to stop the erosion damage caused by the 1942 melt by building retaining damsacross the ravines which are also visible to this day. How- ever, the deep scars of the flood are still visible on nearly every drainage in the Wet Mountain Range, marked by a flat plain suddenly dropping into a deep ravine.

While we do not have as much data on the second worst flood in Custer County history, we have plenty on the third worst that took place on April 17, 1987. This flood came in at a peak of 1,410 CFS at the Grape Creek entrance to Lake DeWeese, but like the 1942 flood it shared many of the same traits.

A deep snowpack with warm temperatures caused a rapid melt. But there is a nuance here: the ground underneath the melt was frozen from early winter moisture and melting. This created a shield that melting water could not penetrate in most areas, so the only place the water

could go was to flow to the Valley floor. As the pictures show on this page, the longstanding water created a lake across the entire Valley floor, submerging roads, bridges, ranches, and causing lasting damage.

What we know is that the Valley floor turns into a lake on occasion in the spring, but houses and roads are constantly allowed to build in obvious flood zones. The only reason this happens is that we have forgotten our history here in the Valley.

As a side note, Perry did say that his research showed the DeWeese dam was in good condition to withstand future big storms.

Local government officials have refused to engage in flood mapping out of fear that such a map would open the county up to lawsuits when houses were knowingly allowed to build on flood plains. A recent presentation by the state regarding flooding was attended by Commission- ers Bill Canda and Kevin Day along with Zoning officer Jacki Hobby. All disregarded any idea of creating flood maps, concerned that if they were created, homeowners could take legal action against the county for allowing building permits in known flood plains. One thing left out of these conversations with the state was that Commissioner Kevin Day’s home in Wetmore is in a flood plain, and Commissioner Bill Canda’s home is on the border of two possible flood plains.

New property owners to the Valley often have no idea of the not-rare flooding events that take place in the Valley, but thankfully, the state has kept good records that show major floodings in areas next to drainages and can experience catastrophic flooding, mostly in the spring.