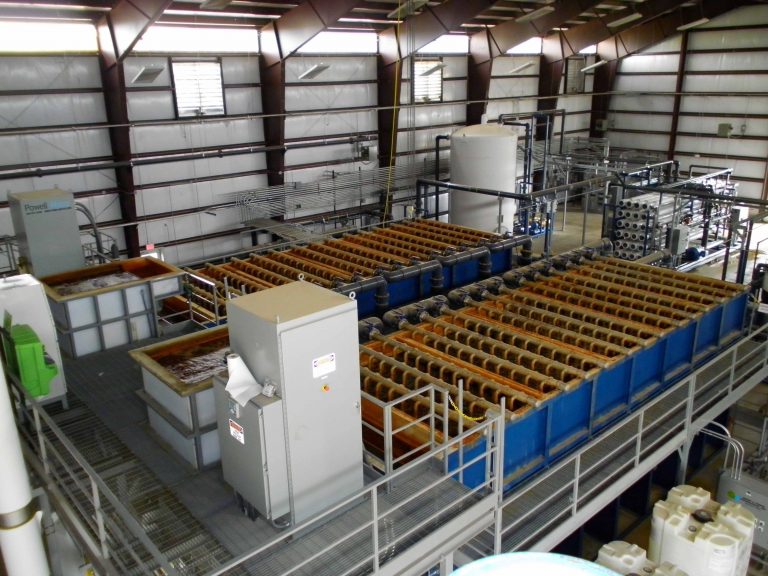 Locals work on Round Mountain solution

When former Custer County resident Yarrow Spitzfaden first heard about electrocoagulation and what it could do for her former hometown, she made a call to Round Mountain Water and Sanitation Director Dave Schneider to share what she had learned as an administrative assistant for the Department of Water Quality Management at Red Rocks Community College located in Lakewood, Colorado. That observation of a former resident, raised in the Valley, might have made all the difference for the Round Mountain special district as it faced the seemingly intractable obstacle of replacing a failed 48-year-old water treatment facility.

It would not be a stretch to say that Round Mountain is facing a threat that could bring the economic foundation of Custer County to its knees trying to pay for a $16 million-dollar wastewater treatment facility with only 650 accounts ($25,000 per account on average). As detailed in the Tribune’s story last week, a mix of bad soil conditions, higher water standards, a massive territorial special district, and low population density has resulted in Round Mountain exhausting all options of trying to build, and then maintain, one of the most advanced technological wastewater facilities in the entire state of Colorado. Or in more simple terms, Round Mountain had to find a way to treat wastewater coming from the district’s sewers to a quality that is superior to drinking water before the water was returned to Grape Creek. State and Federal government-approved mechanical facilities that could accomplish the water quality standards far outstripped the ability of Round Mountain to finance, build, and then staff the wastewater facility.

Thanks to the serendipitous observation by Yarrow Spitzfaden regarding electrocoagulation, Round Mountain director Dave Schneider has already applied and received approval from the Colorado Department of Public Health and Environment for a pilot program to be built and monitored in the district. A somewhat surprised Schneider said to the Tribune that, “this was about 12 months faster than I expected for approval.”
The department of Water Quality Monitoring at Red Rocks Community College where Spitzfaden works is more than what meets the imagination of a “community college” department. Red Rocks has long distinguished itself as a state-of-the-art facility with close ties to the Colorado School of Mines located in neighboring Golden, Colorado which is one of the leading national engineering and research institutions in the nation. Many Mines students take classes at Red Rocks as part of the process of graduating from the rigorous Mines undergraduate and graduate programs. In addition, The Colorado Department of Public Health and Environment works with the testing facilities at Red Rocks to test the quality of various water districts in the state and provide an information center for solutions to problems like the ones facing Round Mountain.

Schneider was able to see a test setup of electrocoagulation at Red Rocks and contacted Powell Water, the business that has developed the technology over the past several decades.

When wastewater is treated the goal is to separate the solids from the water. The current Round Mountain lagoon system uses bacteria and aerators to break down wastes. This breakdown eliminates pathogens and allows heavy metals to fall to the bottom of the lagoon. The water is then piped into ground infiltrators and the sediment of the soil filters the rest of the water. This system is like an enlarged septic field. The problem is that the soil around Westcliffe and Silver Cliff clogs and limits the effectiveness of infiltrators.

Other methods to remove solids and metals from water can be done through mechanical means that add chemicals in the process to coagulate the water-borne solids and force them to separate from the water. This type of chemical coagulation is used in larger cities and was the technology approved by the state and federal government already, but comes at a huge cost.

Electrocoagulation, a treatment process owned by Powell Water, is unknown to most in the wastewater treatment industry in Colorado. The technology was originally developed for treating fracking water in the oil industry. The process involves running wastewater through a series of electrically charged metal plates that force solids and metals to coagulate and isolate from the water without the use of chemicals. As environmental standards have steadily increased over the past several decades, Powell Water has started to offer its technology to wastewater organizations. The main reason is that the process is a tenth of the price of chemical coagulation.

In addition, the sludge that is collected from the electrocoagulation process is free of heavy metals and chemicals, meaning that it can be used for fertilization of agricultural land, something that is not easily done with a lagoon system or chemical coagulation.

The system is already being used by several water districts, and Round Mountain has visited one such facility in Oklahoma to see if they can achieve the environmental standards set by Colorado. By tweaking the way the process works, Director Dave Schneider hopes to be able to meet the environmental requirements.

But one dark cloud hangs over the entire process: money. Because this is an experimental pilot program in Colorado, the Water District does not easily qualify for standard loans and grants. While the cost of the project will be in the $3 to $5 million dollar range, compared to the proposed $16 million dollars for a mechanical/chemical plant, it is a price tag that the district cannot hope to pay for itself upfront. Schneider is working with various agencies in Colorado and the Federal government, but nothing is certain due to the fact that this will be the first facility of its kind in Colorado. People in the Valley have already started to suggest that if the two towns and the county realize that the economic engine of the county is currently stalled due to the sewer tap moratorium, they can help share the burden of the new facility.

While the housing growth in the county is often a contentious subject, it is clear that the many vacant lots and entire barren blocks of Westcliffe and Silver Cliff are a prime place for beneficial growth to take place. Round Mountain has seen a steady increase in tap purchases in the district since 2018. In 2021 alone 77 taps were purchased, up from a mere 6 in 2018. There is clearly a demand for housing in the two towns, but that is stalled until a new facility can be built.

While the situation is dire, it is the hard work of current and former citizens that is bringing hope and momentum to solve the problem at Round Mountain.

The Tribune will continue to cover the progress and drive of the possible electrocoagulation solution at Round Mountain.

Published in News and Uncategorized