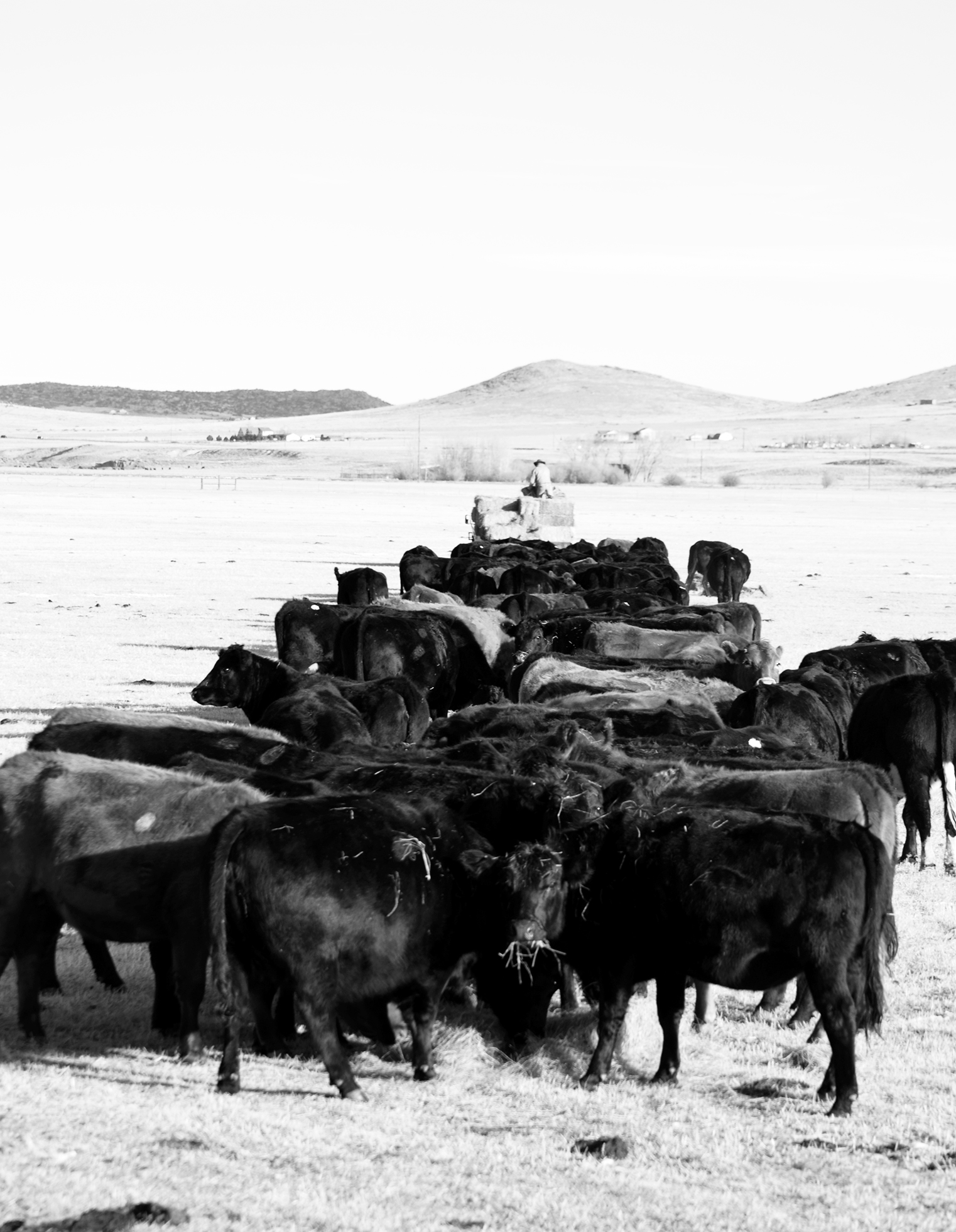 This is the third in a multi-part series exploring how Valley residents actually navigate the winter months, managing cold, wind, snow, and ice while going about the daily activities that provide our livelihood and sense of community. Here, we look into the rigors of ranching across the winter months, a long and revered tradition in the county.

As noted in last week’s piece on winter outdoor activities that can assist in beating back the winter blues, it is also possible here in the Valley for non-ranchers to experience a bit of ranching life. We cited Music Meadows and Elin Parker’s winter programs there that provide just such a touch by way of horseback riding and hiking, snowshoeing, and cross country skiing at their guest ranch facilities. But actual ranching is another story, so to speak. Parker herself notes that she does not winter over her cattle there, focusing on summer stocking only. So, while she devotes her energies to the guest aspects of Music Meadows during the winter, she also observes that “it is a bit of a break for me!”

Non-ranchers who drive the two main highways and the county roads add to their visual delight in the high peaks, the pastoral scenes of winter grazing cattle—often a bucolic rendering of hefty, dark bovines starkly contrasted to the meadows’ winter white. It is a pretty picture, of course. But the ranchers who work these herds across the winter would hardly romanticize it at all.

As a matter of fact, with the drought broken and the consequent larger herds in the Valley, ranching as a vocation and lifestyle is particularly rigorous during the winter. “We feed every day,” says Daryl Geroux, whose family has ranched here for several generations. “We are spreading hay around for all the cattle,” and of course “don’t just throw down the hay and move on; we are watching the cattle every day as well, for health, and for calving times.” So that calving is not entirely random, ranchers like Giroux turn out their bulls for a fixed period of time, about 60 days in late spring and early summer. “It’s a kind of control,” Geroux points out, bringing birthing into the fields in March, which itself can be a brutal winter month in these parts. “But just everything is really good this year,” Giroux says, “with being able to feed with our own hay, so different from the heavy drought three years ago when we had to buy and bring in not such great hay.”

When the daily feeding and veterinary matters are tended to however, the day doesn’t simply end for the rancher. “Because there’s no time for it at all in the summer,” Geroux tells us, “after the feeding, we work on our equipment; it’s going to have to be ready to go in the next season.” So, add mechanics to the ranchers’ winter days as well.

Sara Shields, who ranches with her husband Mike, called us from the National Western Stock Show in Denver with some commentary on winter ranching responsibilities and accountabilities. Taking time from her 31st year at this showtime for the ranching and farming community—which has grown to international proportions, now featuring producers from around the globe—Shields raised some pointed observations about her and Mike’s working lives: “The shortened days of winter give us fewer hours to be out doing what we need to do, and yet the day to day business of ranching continues, the yearend reports, the budgeting for the next year, making those critical decisions for the coming year’s business plan. And there’s not a choice about doing what we do, it’s being a good steward of what we’ve been given, the seasons themselves. We can’t just wait around for the weather to change; we need to be out there whether it’s inclement or not.”

And “being out there” involves so many things to which only ranchers know how to be attentive: positioning the feedlines with the protection of the cattle in mind; determining particularly how wind protection can be implemented; changing nutritional needs across the winter, especially to insure the pregnant cows an opportunity for healthy and safe spring calving; managing live and running water resources. The latter involves “chopping out the creek and the stock tanks,” Shields notes, adding again that despite weather conditions, the working rancher will be “out in the elements several times a day, and if it stays below freezing, we’re still out.” Catching her breath, she pauses to celebrate, in a way, some of the fruits of those labors as proudly shown at the National Western by at least six Custer County ranching and farming families. “It’s arduous, yes, but so exciting and satisfying!”

Willdra Ruzanski’s, reminiscences about her multi-generational ranching family and their neighbors and friends have often graced the pages of the Tribune, She vividly remembers the non-mechanical aspects of ranching in the Valley, and can still call up the names of the “stacker” horses which assisted the field workers in hay harvest, preparing for winter feeding, after the cattle had been brought down closer to the barns from their summer grazing in the high pastures. “Beef cattle depend on us,” Ruzanski muses, “every single day, and now, just as then, that’s 24 hours a day…” She is aware of many ranch families, like her own, who have kept at the business of cattle over generations, four seasons a year, who have gone about the work as a tradition to keep. “And it’s cold, and it’s miserable, and you’re wet and cold too, and have a lot of watching and feeding to do, but you look up at those mountains and the beauty around you, and you’re so happy not to be in an office somewhere, instead here you are doing what your ancestors were doing.”

While thankful for some of the advances in agrarian science and technology—for example, weather and climate aren’t such mysteries these days, stock lines and breeding are more refined—Ruzanski also knows that some of the neighborly, social aspects of ranching that held whole neighborhoods of ranchers together may have passed. Nonetheless she notes, “Some still do some things the old fashioned way, branding and haying together when possible.”

But in the midst of Ruzanski’s recall of “the old days,” she is quick to laud the few young people who have stayed committed to Valley ranching. “I am so, so proud of the young people who have chosen to maintain ranching here; it takes a lot of fortitude, there’s no money in it, pasture land is harder to come by, most raise their own hay as well.”

Interestingly, attempts to reach two of those younger ranchers for their perspective on “doing what their ancestors did” were unsuccessful. Really because Caitlin Rusher and Kylie Ruzanski were simply too busy doing the ranching with their respective herds. As Shields pointed out, there is no choice involved, it’s what ranchers do, even all winter long—work, and work hard.

Geroux took a minute though to “add one other thing: winter is the only time I get to go fishin’ since the summer is filled. So I do get to the ice holes sometimes!” That kind of good spirit is probably emblematic of the tenacity and commitment our Valley ranchers bring to the days of winter here—as in every season of their calling and tradition.