–This article is sponsored by New Outlook Dental, now located in downtown Westcliffe, Colorado. Call them at 719-544-6788

At their October 31 meeting, the West Custer County Hospital District Board voted unanimously to approve the business plan for a proposed merger with Heart of the Rockies Regional Medical Center (HRRMC). This business plan was approved by the HRRMC Board of Directors at their meeting on October 22, and resulted in a letter of intent to begin work on the merger. The process is estimated to take about 6-8 months, and will result in HRRMC taking over administration of the Custer County Medical Center.

“I don’t think I’ve ever run into a situation as unique as this,” said Bob Morasko, CEO of HRRMC, referring to the deal between the two hospital taxing districts. Morasko was present at the meeting to give highlights of the business plan and a brief project history to the Board. Over the course of 1-2 years, beginning with discussions with Lisa Drew, the Medical Center’s executive director, he got together with members of both Hospital Districts’ boards to discuss the possibility of having HRRMC assume responsibility for running the Medical Center. Tommy Barnhart, a consultant from the Colorado Rural Health Center, was hired to do a feasibility study. Essentially, Morasko said, the point of the study would be to determine whether the merger would be cost-effective for HRRMC.

A rural health clinic not aligned with a hospital, like the Custer County Medical Center, gets reimbursed on a fee schedule – such as those set by Medicare, Medicaid, and the VA – that amounts to signficantly less revenue than a hospital-based rural health clinic could generate, since it would operate under a cost-based reimbursement plan. The study summarized the numbers thus: as a free-standing rural health clinic, the Medical Center is currently operating at a loss of $480,000 per year. This operating loss is subsidized by the West Custer Hospital District. Under the management of HRRMC, the clinic would show an operating loss of only $61,000. In order to make the deal more attractive to HRRMC, the West Custer Hospital District would agree to subsidize the annual lease of the property and premises of the medical clinic to HRRMC, valued at about $35,000 per year. Further, it would provide a minimum subsidy to HRRMC of $175,000, or up to a maximum of $300,000, to operate the clinic and provide services to Custer County patients. Under these circumstances, the study concluded, the HRRMC stood to operate the clinic at a profit.

The proposed contract between the districts, Morasko concluded, would contain an “out clause” for each party, which would give a year’s period to work out the details of division. Any equipment donated to HRRMC would be donated back to the clinic if the agreement is terminated.
As part of an immediate addition to services, HRRMC is looking to hire a family doctor to reside in Westcliffe. Existing clinic staff will be retained if they meet HRRMC employment standards, and will be eligible for its wage and benefits packages. Plans to improve and increase services began with HRRMC taking over lab referrals earlier this year, and include the potential for adding pharmacy services to the existing lab courier services. Eventually, Moresko said, the courier’s van could also be taking patients back and forth to Salida for tests and procedures. The possibility also exists for other HRRMC specialists to begin seeing patients at the clinic, although Morasko warned that cost-effectiveness would be a factor in staffing decisions: “It has to make sense for everybody. Telemedicine can work for things like psychiatry and social work.”

“It improves medical availability for the community,” said Hospital Board President Bob Tobin, in discussion of the motion to approve the merger agreement, “which is something we could not do on our own. The clinic would be regressing without this back stop – this is not just a welcome addition, this is tantamount to a savior walking in and saying, ‘let’s go.’”

In answer to questions from county commissioner Tom Flower, who was present at the meeting along with commissioner Jay Printz, the Board and Morasko stressed that the West Custer Hospital District is not going away, as it bears the responsibility for collecting the levy to support clinic services, as well as maintaining the clinic’s physical plant. Both Flower and Printz later praised the Board’s efforts to improve medical service to Custer County’s

See what you are missing! A subscription to the Wet Mountain Tribune is only $0.73 cents a week! 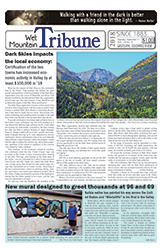