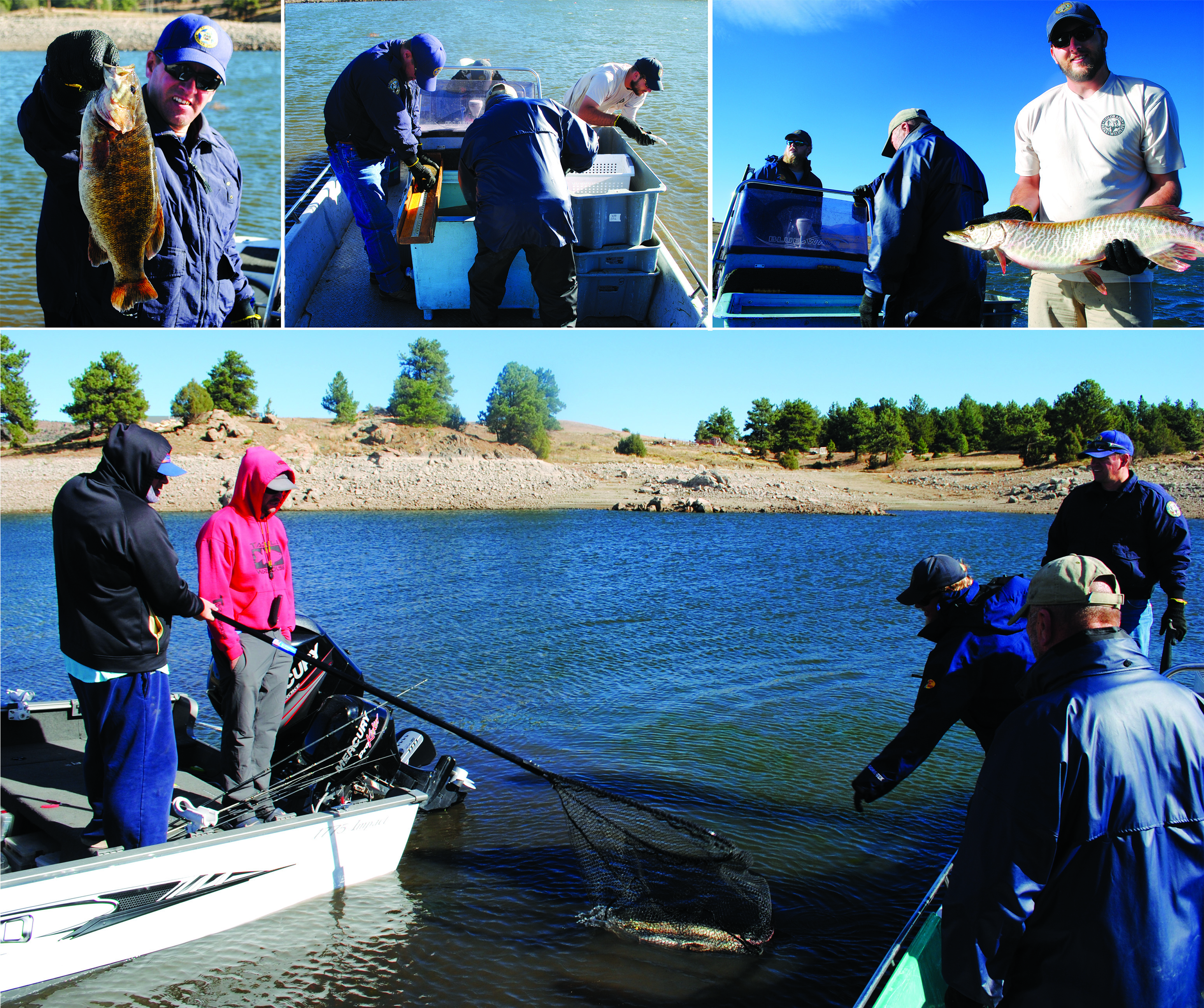 On the chilly morning of Oct 5, Dan, Jacob, and Tyler, from the Department of Wildlife brought the boat up from Pueblo for a little fishing. Joining them for the annual Fall fish survey was Custer County’s local Game Warden, Justin Krall. Every year, a series of Gillnets are dropped into the lakes of Colorado including our own Lake DeWeese. These nets are left in the water overnight to trap passing fish. In the morning the nets are pulled in and everything with gills is weighed and measured. This gives the Department of Wildlife an estimate of the biodiversity within the Lake and what game fish need to be brought in from hatcheries next spring.

“This is the lowest I have seen the lake in the twelve years I have been in Custer County,” notes Krall. The only time there has been less water in Lake DeWeese was when it was emptied for dam repairs in the 90s. Despite the low tide, there were still a few fish to be caught. The nets pulled in tiger muskie, bass, brown, rainbow, and cutthroat trout, white sucker, one tiny green sunfish, and many, many crawfish. All of the fish are brought in from hatcheries around Colorado. The tiger muskie was specifically brought in as a control fish. Before the muskies were introduced, 80 percent of the biomass in the Lake was taken up by sucker.

This survey was “the poorest in a while.” With the water so low, only three out of four nets were used this year. Less than 50 fish were caught this year, compared to the 159 that were netted in 2017. The water near the dam barely reaches 21 feet at the deepest, which will, fortunately, give the fish some livable habitat during the winter months.
Unfortunately, not all of the fish survive the survey. Some die even before the nets are reeled in; others don’t survive the shock of being measured. The fish that don’t make it are instead donated to various groups. Some fish are given to the angler’s prowling the lake on survey day. Fish that aren’t given to humans are taken to the Raptor Center in Pueblo, which is currently taking care of a few injured eagles. Finally, any fish that don’t end up as bird food fine dining at Bear Rehab. (This is rehabilitation for orphaned bear cubs to be reintroduced into the wild, not bear’s with addiction issues.)

In the end, the extreme drought leaves a question on the effects of climate change in the Valley. Climate change is a sensitive subject and it is hard to deny that the county had a particularly dry year. While those living on the coast might face a greater degree of flooding, Colorado will have to deal with an increasing number of hotter and drier days in the years and decades to come.